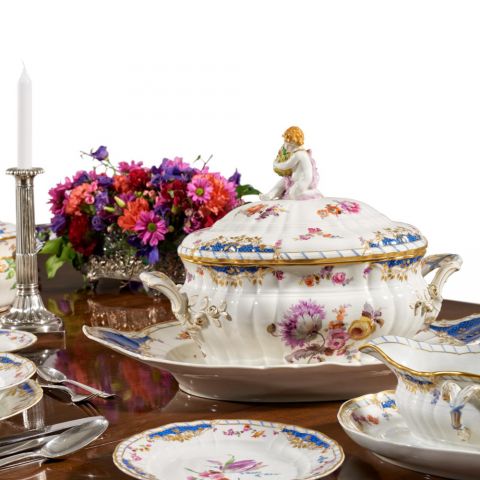 21 PORCELAIN FIGURINES AND A MUSIC DESK FROM THE APE CHAPEL.

The monkey figurines, dressed in elaborate rococo clothing, parody the upper social class of the 18th century and its allures in a highly exaggerated manner. Historical records suggest that the eccentric apes were inspired in particular by the chapel of Count Brühl. The male monkeys take on the roles of the musicians, while the female monkeys are portrayed as singers.
Even though the exact date of origin of the chapel is not precisely documented, the form numbers and a purchase of 19 such figures by Madame de Pompadour suggest that the figurines were developed around 1753. Probably created by Johann Joachim Kaendler and reviewed in 1765/66 with the assistance of Peter Reinicke, the monkeys are considered the "most bizarre classic of the Meissen Baroque" (www.meissen.com).
In the middle of the 18th century depictions of monkeys, which in a parodistic way depict human traits, enjoyed great popularity. This genre of the so-called "Singerie" (French "singe" = monkey) was not only interpreted in porcelain, but can also be found in wall and ceiling frescoes or on goblins. There is a presumption that Christophe Hueet's wall paintings in the so-called monkey cabinet of Chantilly Castle may be regarded as a model for the Meissen chapel. Another French model could be a monkey chapel of the Mennecy Manufactory from the 1740s. Another example of a chapel that resembles Kaendler's models for the Meissen manufactory is an alabaster chapel from Venice, made around 1745, that today is exhibited at the Metropolitan Museum in New York.