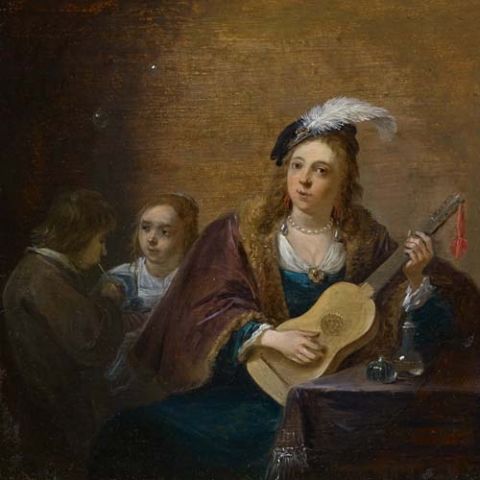 Do you wish to purchase (Giovanni Francesco Barbieri) Guercino and receive future offers?

Giovanni Francesco Barbieri, known as Guercino, is one of the most famous and productive painters of the seventeenth century, whose fame spread very quickly throughout Europe and transformed him from an "enfant prodige" into one of the most important interpreters of the Baroque period. Many of his works are listed in the famous "libri dei conti", the book of commissions, which contains the list of Guercino's works and those of his workshop from 1629 to 1666. Detailed descriptions of the themes of the paintings, the selling prices and the names of customers, buyers and agents are also listed here.
On the 12 October 1650 there is a reference to a half figure representing David with the head of Goliath, created for Mr Ludovico Fermi of Piacenza. The painting created for Fermi was identified by Luigi Salerno with a painting that was in the Trafalgar Galleries in London in 1983 and acquired by the Museum of Western Art in Tokyo in 1999. In 2011, our picture finally came to the surface, slightly different in size from the Japanese version, with a few colour variations and a more compact, denser materiality.
The existence of a second painting with the same composition has triggered a debate in recent years about the order and authorship of the two works and about a possible involvement of the workshop.
At first Andrea Emiliani and Nicholas Turner interpreted the Japanese version as the original painting by Guercino mentioned in the book of commissions because of the various underpaintings it contains, while our work was considered as a replica of the artist with the participation of the workshop for an as yet unknown customer: Despite the sharper and more convincing colour spectrum, the design seemed less fluid.
In a statement from 2017, Turner changed his position and identified in our painting the picture created for Mr Fermi in 1650. According to Turner, the work kept at the Museum of Western Art in Tokyo was to be regarded as the first draft with which the artist studied the composition intended for the client from Piacenza. The reason for Turner's change of opinion lies in the scientist's in-depth examination of the painterly practice of the artist from Cento: Guercino used to make trial versions of his works, using materials of inferior quality for them. In the paintings intended for his customers, on the other hand, he used more precious and more expensive pigments.
The Japanese version, which has several underpaintings and a greater spontaneity in the execution, was created with far less precious paints than the David presented here, in which the sky contains the precious ultramarine blue and the ductus consists of final brushstrokes that are more compact and more defined.