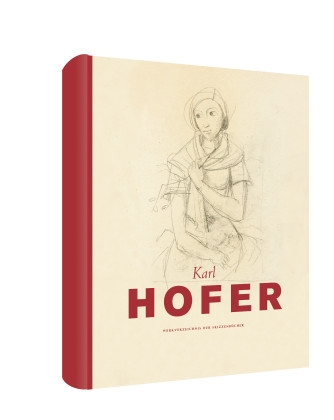 Do you wish to purchase Karl Hofer and receive future offers?

Title: Karl Hofer - Catalogue raisonné of Sketches.
Karl Hofer bequeathed 17 sketchbooks. Another six burned when bombs hit his workshop on March 1, 1943. Of them only a few individual sheets remain. Thus this part of his creative work is currently represented by 641 sketches. The sketchbooks, which have not yet been published, deign a completely new look on the oeuvre of the significant German artist. They originated between 1910 and the 1950s. It is only here where Hofer faces - privately and at the same time detached from all responsibilities - himself, turned towards his conduct. In the sketchbook he is able to put down his deepest sentiments, feelings, struggles, and objections, his incentives and decisions - without having to make allowances for anything or anyone.

Thanks to the rearrangement by Prof. Dr. Dr. Gerd Presler the catalogue raisonné corresponds to the international scientific standards for catalogue raisonnés of sketchbooks. His work is based on the preparatory work by Karl Bernhard Wohlert which is the result of 35 years of Hofer research.

Commemorating the 60th anniversary of Karl Hofer's death VAN HAM Art Publications presents an intimate insight into the "artist's peculiarities" with the sketchbooks.

The oeuvere of Karl Hofer extends over a period of 57 years between 1898 and 1955, an extremely interesting and fascinating period marked by the transition from classicism to classic mordernism.