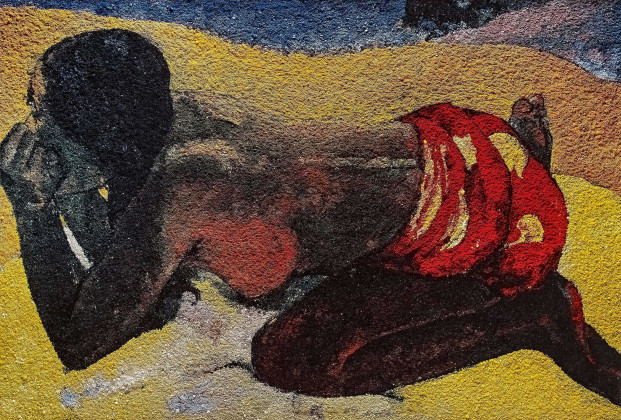 Do you wish to purchase Vik Muniz and receive future offers?


Verso there is a label by the Galerie Xippas with the signature and date by the artist. One further gallery label with work indications is on the backside of the frame.

The Brazilian artist Vik Muniz walks a fine line between the paths of the auto-didact and the academy artist. Without having formally completed an artistic education at a university, his works nevertheless benefit from the many visual arts courses he attended. His work in the advertising industry in the early 1980s had an influence on Muniz, in that the power of images and their ability to manipulate have become part of his artistic process.
Muniz attained world fame through his reconstructions of classical masterpieces. He is also appreciated for his often unconventional choice of materials. In the work "Otahi (Alone) After Paul Gaugin, From Pictures of Pigment" these two characteristics are united. Instead of using oil paint like Gaugin, Muniz reproduces Gaugin's work with the help of color pigments. He then "conserves" his reconstruction photographically. The choice of pigment instead of oil paint makes it seem as if Gaugin's unknown island beauty were embedded in real sand. This is further underscored by the large-format, high-resolution chromogenic print. But the distance thus bridged towards the viewer is still not enough for Muniz. The Brazilian artist always works with the goal of bringing out hidden aspects of works we have known for a long time. In this work Muniz uses red pigment to emphasise the feminine attributes. Precisely in our present day context Muniz reveals the spectator's perception and in particular exposes the female objectification inherent to our traditional viewing habit. By overcoming distance, Muniz succeeds in initiating a process of self-reflection in the viewer. He masterfully interweaves art-historical, material-aesthetic and social aspects and thus creates a work that remains highly topical in today's social discourse.