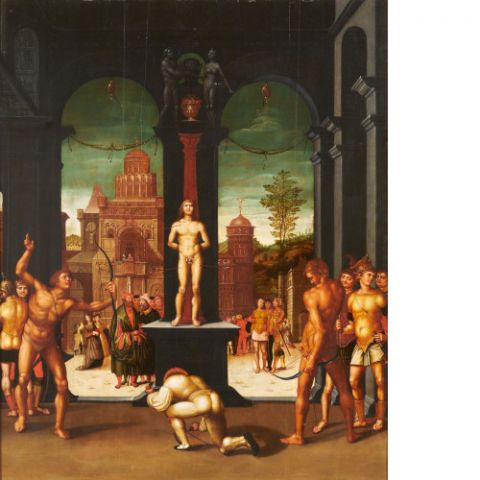 Lot 1006 | Three Woodcarvings from a Polyptych: The Evangelists Mark, John and Matthew 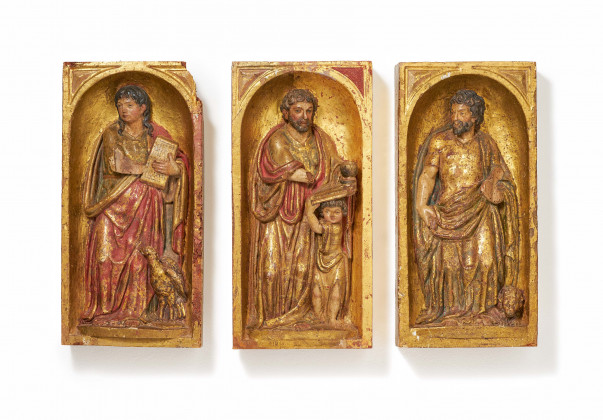 Do you wish to purchase Spanische Schule and receive future offers?

The reliefs offered here (lots 1005 and 1006) were originally part of a large Spanish altar from the second half of the 16th century. In 1979, a Dutch private collection still contained 15 scenes, distributed over eleven panels, of the originally more detailed ensemble; initially, the altar must have comprised even more scenes.
In addition to the scenes from the childhood of Christ - the Visitation, the Nativity and the Circumcision - and the three Evangelists, the altar included four scenes from the life of Mary (Annunciation, Assumption of Mary, Pentecost and Coronation of Mary) as well as five other scenes from the life of Jesus (Jesus in the Temple, Gethsemane, Scourging, Bespotted) and the fourth Evangelist (Luke). The present location of these fragments is unknown.
The altar, which was dedicated to the life of Mary the Mother of God and the life of Jesus, was probably taken apart in the 19th century. They still have substantial parts of the original setting and gilding. of which now a
The reliefs are typical examples of Spanish religious sculpture of the late Renaissance. The depictions in bas-relief are possibly based on graphic models. A precise classification of the panels is still pending. Castile is a possible region in which they could have been created. A detailed documentation is available.