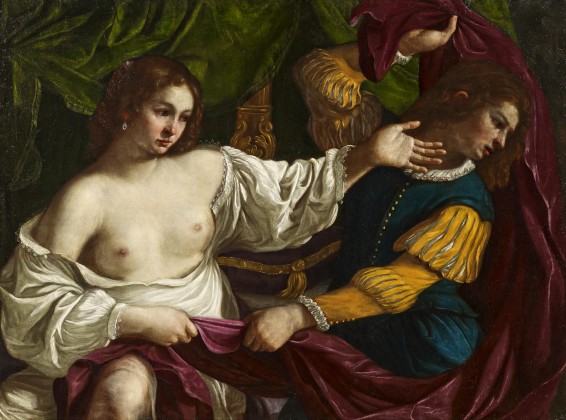 Do you wish to purchase Bartolomeo Gennari and receive future offers?

Bartolomeo Gennari was considered one of the closest collaborators of the baroque painter Guercino, from whom he took up the late style. In several works Guercino transposed the theme of Joseph and the wife of Potiphar. However, the present work by his pupil is not a copy, but an autonomous version of extraordinary beauty and freshness.
The source of the motif is taken from the book of Genesis: Joseph was the eleventh of twelve brothers and the favourite of his father Jacob. His brothers sold him to merchants
who were on their way to Egypt. Joseph was bought by Potiphar, the commander of the Pharaoh's guards, who appointed him as his steward. His wife fell in love with the young man and tried to seduce him several times - but without success. One day, while Potiphar was absent, the wife assailed Joseph again, who in turn managed to free himself from the woman's grip, leaving a piece of his garment in her hands. In intense colours and in a half-portrait of the two figures, Gennari depicts precisely this moment in the present painting.