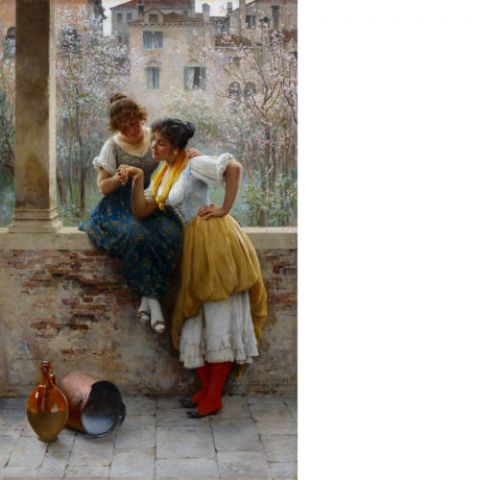 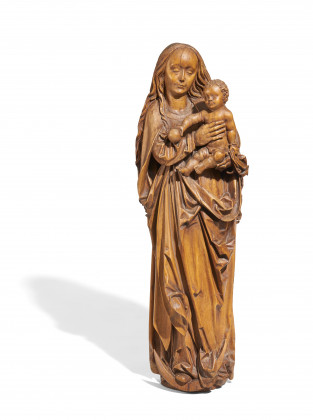 Do you wish to purchase Veit Stoss and receive future offers?

The very well preserved figure shows Our Lady standing on the crescent moon, a reference to the Revelation of the Evangelist John, holding the Child Jesus on her left hand in front of her breast and supporting her with her right hand. The naked baby Jesus turns to the viewer. She holds an apple in her right hand, a symbol of the Fall of Man as a reference to the redemption of mankind through his later death on the cross. Mary wears a cloak draped over her shoulder over a tight dress, which she takes up under her right arm, causing it to fall in elongated folds before her body. The drapery is enlivened by crumpled, virtuously carved parts. Maria's face with the high forehead is framed by the broadly spreading hair, which falls in strands in front of the body and in waves onto her back. Originally the figure will have been the centre of an altar shrine or hung as part of a Marian chandelier in a church.
The virtuosic carving is thought to have been created in the surroundings of the great sculptor Veit Stoß (1447-1533) in Nuremberg. The dissolution of the folds in particular is reminiscent of the style of Nuremberg sculpture around 1500, which was influenced by Veit Stoss, and to whose surroundings the delicate face of the Virgin Mary also refers.

We are grateful to Guido de Werd, Cologne, for his kind support in cataloguing the present work.

Estimated Estimated shipping costs for this lot:
Arrangement after the auction.