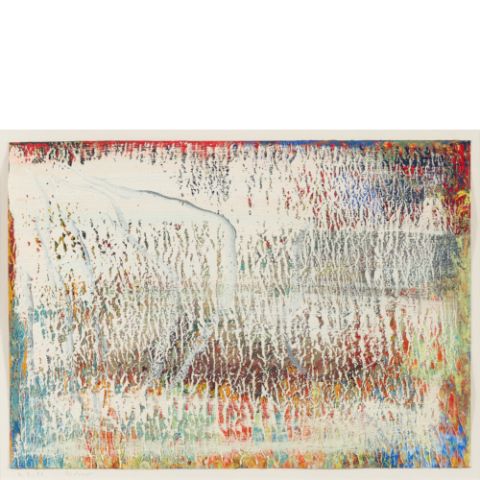 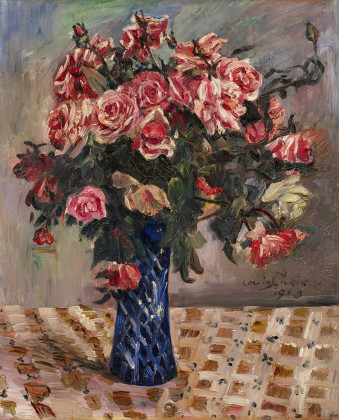 Do you wish to purchase Lovis Corinth and receive future offers?

This painting is a successful restitution case from the art collection of Gustav and Emma Mayer, Frankfurt a.M.


Bouquet of roses, vase and tablecloth - at first glance Lovis Corinth clearly depicted these protagonists in our painting. But the artist depicts far more: with impasto, haptic brushstrokes he paints a lightflooded space, in which the opening and closing blossoms glow and shimmer from red to white. Corinth dissolves the bouquet of roses into vital color tones. What he vividly describes is the growth and decay of nature and thus the impermanence of all earthly life. The geometric diamond pattern of the cut blue glass vase as well as the pattern of tablecloth contrast with the organic forms of the flowers. In 1911 a stroke paralyzed Lovis Corinths left side. Despite the physical limitations, he continued to develop his painting. Thus he works increasingly self-confident, spontaneous and more impulsive which give his works a further expressive value. Color, light and atmosphere now become the real themes of his paintings. Although Corinth was a very respected artist in Germany during his lifetime, especially his late paintings were classified as "degenerated art" by the National Socialists. A large number of his paintings in German museums were confiscated. Also many paintings that are in Jewish collections were looted in the 1930/1940s or dispersed through distress sales. Our painting also suffered such a fate and is now being restituted by the Royal Museums of Brussels and offered for sale.
The Mayer family, originally from Frankfurt emigrated to Brussels due to their Jewish origins. But the Germans invaded there as well. 1939 the family of five was able to escape to England - but part of their possessions had to be left in a warehouse in Brussels, where it was confiscated during the German occupation between 1940 and 1944.
After the Second World War the painting was recovered by the art expert Leo Van Puyvelde. He belonged to an Allied Committee for the Protection and Restitution of Cultural Property. Finally, in 1951, the still life was given to the Royal Museums of Brussels as the original owners could not be traced.
It is the first painting ever to be returned from the museum's holdings to its rightful heirs and therefore marks a milestone in the history of restitution in Belgium. At the same time the work is the only one of 30 lost paintings from the estate of Gustav and Emma Mayer, which could be identified. The nine heirs, who are today living in the USA, Great Britain and South Africa, are still searching for the remaining 29 paintings from the collection of their ancestors, among others by artists such as Liebermann, Camoin, Trübner, Leistikow and Zügel.