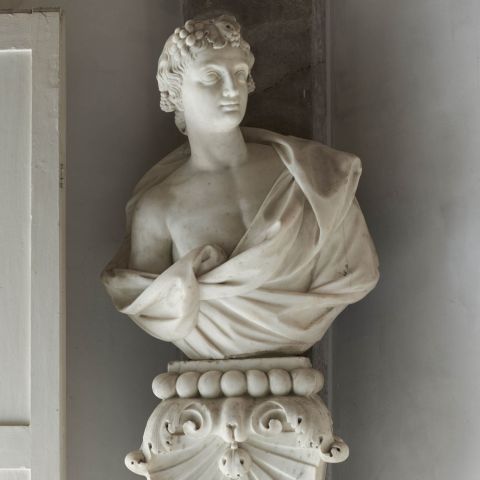 Do you wish to purchase Presumably Italy and receive future offers?

MAGNIFICENT SERIES OF FOUR BUSTS AS ALLEGORIES OF THE SEASONS.

Presumably Italy.
Date: 18th century.
Technique: White marble.
Description: The four male busts, expressively crafted with loose cloth draperies around their shoulders, each representing one of the seasons. Starting with spring, whose head is covered with a small cap, followed by summer with a radiant sun disk over his forehead. Next, Autumn with grapes in his hair, and finally the bust of Winter as an elderly, bearded man with coal tongs. The slender pedestals of Spring and Winter each designed in a conical shape with profiled sections and leaf-bud décor. The pedestal of summer with volute ornament and that of autumn with pearl and scallop ornamentation.

Hubert Lüttgens' aim, when he acquired the old house of the distinguished patrician Klausner family in Burtscheid in 1939, was to convey the culture of old Aachen. However, like many patrician houses in Aachen, it was initially almost completely destroyed during the Second World War. Only the old domestics gabled house remained, but in a ruinous state. After his return from the war in 1945, Hubert Lüttgens immediately started to rebuild the property.
By 1948, the house had almost been restored already. Some additional architectural and interior elements had to be purchased, such as a complete Couven staircase, a fountain, parts of a Baroque park, old iron fences and the wrought-iron gate that welcomes visitors today.
As an art collector and art dealer, it was possible for him to let the house reappear in its old splendour, both from the outside and in the interior, and to realise his dream of old 18th century living culture.
In addition to rebuilding the former gabled house as a new residence, a baroque pavilion was also planned on the garden plateau and built using old components from various Aachen estates. Among other things, window and door reveals made of bluestone from the Schumacher house in Burtscheid were used for the hexagonal building.
The four marble busts probably originally came from the noble estate of Maria Wilhelmine Beissel, which was also destroyed. That estate originally belonged to the old and noble Merode-Houffallize family and then to the Merode-Koswaremme family. There the busts probably adorned the paved courtyard, which was connected to the garden behind it by a staircase.
Today, these magnificent busts stand in the light-flooded room of the pavilion at House Lüttgens next to the tall windows overlooking the garden.

"The greatest work of art, however, is the collection as such. In it, the individual pieces come together as one. Here things have found their place, here they are at home."
(The Hubert Lüttgens Collection in Aachen, p.50)

The four busts are still in their original location and can be viewed by appointment.
Contact: 0221-925862-429, antik@van-ham.com.